Owners hard to sell on real value of home 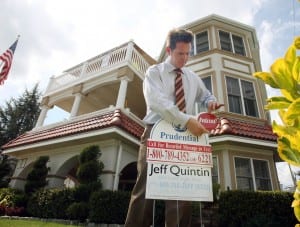 Real estate agent Jeff Quintin said listing a house as reduced does not put a bad mark on it, but instead can make it more attractive to a potential buyer. Photo by: Dale Gerhard

In a buyer’s market, oftentimes sellers do not get the price on their home that they want.

The trick, area real estate agents say, is convincing sellers what the current market is for their home – even if it’s decidedly less than what they originally paid or what a neighbor recently received.

“It’s one of the biggest challenges in today’s marketplace,” said Jeff Quintin, a salesman with Prudential Fox & Roach in Ocean City. “Many sellers are still in fantasyland in 2004 to 2006 when the market peaked. A lot have not adjusted. There are still a major portion of sellers still shooting for the moon.”

Quintin said the overabundance of homes on the market is the problem and sellers need to be realistic that prices will not increase until more inventory is cleared.

“The goal is to determine what price will catch the eye of the buyer. We certainly understand what the seller goes through. At the same time, we have a duty and allegiance to tell them the truth,” he said. “Everyone thinks their house is the best. It’s a matter of looking at the comparable sales and seeing what’s selling. But if there is no interest, they will make an adjustment.”

Another issue is because so many people overextended themselves during the mortgage crisis, they can’t afford to lower their price because then they can’t pay back what they owe, he said. A big part of the large number of foreclosures and short sales on the market is due to many sellers waiting too long while trying to get a better deal on their property.

The market didn’t rebound in time and the sellers were forced to take significantly less in the end, he said.

Brenda Lawn, a real estate agent for Prudential Fox & Roach in Northfield, said a significant number of properties in the market have been reduced.

When starting with a potential seller, she said, she provides them information to make a competitive listing. It’s especially important to list the right price at the beginning because that’s when the home will be most popular.

“The majority of sales are in the first month,” she said. “If you don’t have the right price in the beginning, you lose that momentum and you can’t gain it back.”

Lawn said she stays on top of the market and gives her clients regular updates on sales.

“If there is no offer in the (first) 30 days, I’ll talk to them about adjusting the price,” she said. “If you price it optimistically, reduction is one of the only things you can do.”

Lawn and Quintin said listing a house as reduced does not put a bad mark on it, but instead can make it more attractive to a potential buyer.

“It can entice a buyer to make an offer,” Quintin said. “It’s the same effect as a sale on a suit. … (The buyer) thinks now it’s in the realm of their budget.”

Allan Dechert, co-owner of Ferguson Dechert Real Estate in Avalon, said that to some degree a house may sit on the market long enough that the market changes around it.

“We want to set a selling price based on comparable sales, but sometimes a seller may just want to give it a shot (at a better price),” he said. “But after two weeks or 30 days, we’ll take a look at it.”

Other times a price change could just be based on the needs of the seller, he said.

“Sometimes they’ll just say, ‘Look, I need to get out of this thing. I need to sell it,'” he said.

But with sales improving recently and interest rates still low, it’s an important time to be right about the listing.

“The price is paramount,” he said.

Speak to a Team Member

Our mission, desire, and goal is to assist all parties in accomplishing their goals and obtain a satisfied conclusion to the purchase or sale of their real estate. We make a positive difference in our client’s lives and are committed to our clients having “the best real estate experience they’ve ever had.”